Repeat After Me... Play It RAW Before You Tinker. 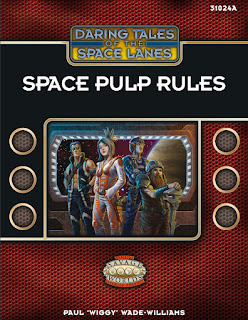 I wasn't overly thrilled with the starship rules in the Sci-Fi Companion as many of you might know. So I set out to build a better starship system. I poured over the Sci-Fi Companion and Daring Tales of the Space Lanes over and over again in an attempt to figure out the math and the means. Keep in mind that I hadn't played either RAW. That was a cardinal sin. When I stepped back from the math, broke out the dice and ran them, a lot of information unfolded. Here's what I learned.

B) Both the SFC and DTotSL work just fine as is. No tinkering needed. But there are some differences that made me choose one over the other. And here they are...

Both DTotSL and the SFC have example starships. The need to craft your own is actually quite low. Crafting starships is a mini game of sorts.
I used to play a lot of Mekton and by the time that Mekton Zeta Plus came out, I was arms deep into tweaking and crafting Mecha. My game suffered for it because I was focusing too much on the gear and not on the plot.

DTotSL gives you all the basic ships you need. If you want to make it slightly different, add one of the Modifications listed in the back of Starships of the Galaxy. Less headache. less prep. Point to DTotSL.

In the SFC, shields act like extra Hit Points. It is at odds with how the rest of the game plays. I get it though. "Shields at 20%, Captain!" It's just not my cup of tea.

In DTotSL, shields use the Powers rules and you have limited uses of them. Also, someone has to run the shields and decide which power to use. It's more interactive for a crew member and it uses rules they should be familiar with. Point to DTotSL.

I'm going to use Daring Tales of the Space Lanes. I highly recommend it. In fact, if you buy Compendium 1 it comes with it's own world creation rules, the free setting rules are in the book, Random hazards, and four adventures. And it's all written by Paul "Wiggy" Wade-Williams (of Triple Ace Games) & Umberto Pignatelli. Paul wrote the original Sci-Fi Toolkits on which the Sci-Fi Companion is based.

That's not to say that the Sci Fi Comapion isn't good. There is a lot of stuff in there, such as races and alien critters, as well as more refined and balanced race creation. I'm glad I bought it, but I won't be using it for my sci-fi games. It's best that I stick to one setting and the core rulebook at my table so as to avoid confusion.

So from now on, all of my sci-fi work, aliens, worlds, etc., will be in support of Daring Tales of the Space Lanes. I recommend checking out the Free Setting Rules. If that is enough to get you interested, then I suggest buying the DTotSL Compendium 1, DTotSL Extras Pack (which contains Starships of the Galaxy), and Fighter Swarms (Free)!
Posted by Vinzent at 11:56 AM