I was going through my wife's craft stuff and I came across a cheap little matte cutter she had. It was perfect for cutting down all of the chip board leftovers I have from some failed 8x10 tile experiments. 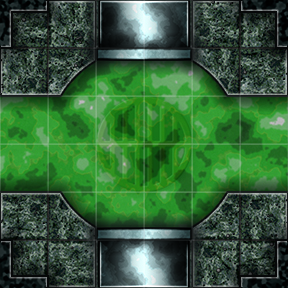 So to kick off my DIY tiles, I started with sewers...again. Well at least these are with my new map style and I think they look pretty sharp. I never bought Paizo's Game Mastery Tiles for the sewer adventures in Pathfinder Society. I'm not a fan over their tile sets (though their maps are fabulous). My problem is that they are 5x8 and my OCD hates odd numbers as well as tiles that can't be turned sideways to be reused in a grid. They are also a bit on the thin side which makes keeping them butted up against each other a pain.

So I have adopted 6x6 as my official tile set size, and I have more tiles planned as time goes on (such as sci-fi!). As for rooms, they can break the 6x6 rule depending on what they are.

I've had a super hard time trying to build re-useable tiles due to Pathfinder Society. It would be impossible to recreate any of their maps with a generic tileset. But my mental issues wouldn't let me get away from trying and failing to make them for PFS. I have to distance myself as much as possible for the idea and move on with my crafting. That said, my sewer tiles are compatible with PFS and can loosely replace their designs. Mine aren't exact to what they have, but it keeps the general gist of things.

Anyway, you can find my sewer tiles in the free downloads section, or right here in the ticketyboo!

PS> I had an experiment idea about gluing plastic sheets from cut up sheet protectors onto my tiles to make them wet/dry erase. I tried white glue spread thin, regular blopped white glue, and a clear colored glue stick. Neither white glue held the plastic on, and even warped the cardstock that was already mounted to the chipboard. The gluestick did the best job, but it did have problems holding onto the sheet in places and it slightly discolored the printed art.

I've tried contac paper but I can't get the permanent stuff, and wet erase markers want to bead up on it and don't make a crisp line. Ah well, back to the laboratory!
Posted by Vinzent at 3:01 PM