My FLGS Was Robbed!

Monday at around 1 in the morning my FLGS was robbed. The register and some computers were taken but most of the product was left intact.

Fortunately the owner has good descriptions of the thugs as they cased the store two weeks prior. Also the idiots left DNA samples for the police via discarded soda cans.

I found out today and made a special trip down there to buy some stuff. My money is tight right now, but I like this store and want to support it. I bought a Chronoscope mini that I already had. I guess this one will be a blue skinned alien. The other thing I bought was the biggest Reaper pack I have yet seen - a Pathfinder Red Dragon. Here's a comparison pic... 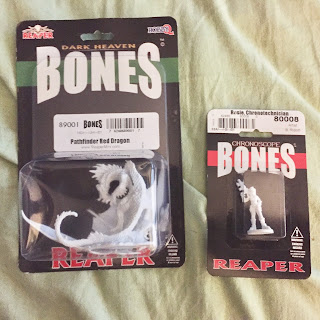 I wish I could have done more. If you are in the Seattle/ Redmond Washington area, drop on by to Games and Gizmos and show your support. Don't let some Jack-Hole thieves trash our fun.