How Miniaturization Covers My Crappy Inking

I tried my hand at inking with a brush pen when I started doing the Slipstream figure flats. Actually I was doing them as concepts of what the other aliens looked like and it occurred to me that they would be prefect for figure flats. Anyway I decided to do the quick and dirty, Saturday morning cartoon style. After all there is a lot of art to do.

My inking sucks. What's more, the Faber-Castell brush pen wore out its tip quick. Suddenly I couldn't do fine lines. I thought it was just my lack of brush control. Considering I was working on a mini sketchbook (5.5 x 8.5) I thought I was going to really need that finer point. Anyhoo, my inking got steadily worse as the pen wore out and all of my characters were made up of these thick lines.

Well yesterday I started to shrink them and put them into a tri-fold document. Given that the Slipstream flats are 1.25" tall, these things got majorly shrunk. They're so tiny, that I'm glad they have thick lines. finer detail would just get lost. here's an example of an Aridian in both full size and flat size. I hope this shows up right. 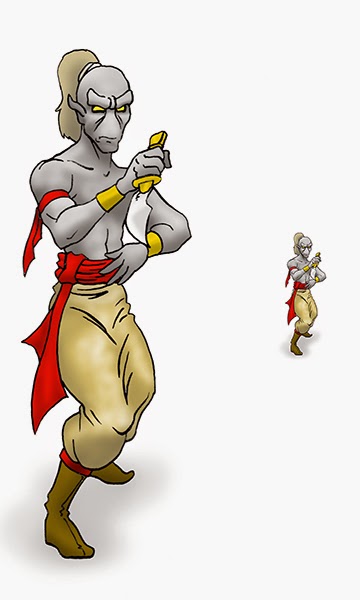 So my crappy inking was a blessing. The moral of the story is that thick lines are necessary if your going to shrink the image a lot. I'll keep going with the brushpen but I bought some Micron pens for practicing detail work on other art. My inking is coming along well and my proportions and posing are getting much better. I got five female alien versions done today. Hopefully I'll be able to put together the figure flats sheet before the end of the month.

PS> If you want to see more of my crappy inking, the other figure flats are posted in this thread.