I'm going to explain my methodology for creating campaigns, and to do that, I'm going to start with Encounters. They are the basic building block of every adventure or campaign.

An adventure is a plot with a series of problems (Encounters) that need to be addressed to solve the adventure. Common Encounters involve fighting, socializing, exploring, or chasing.

A Bad Encounter is one that gets resolved with one or two rolls. It's a blip, a minor inconvenience that did not require the players to engage with story.

A Good Encounter is one that causes the players to strategize. If they are talking about what to do next, they are playing the game. And their solution may not be what you have planned, but be flexible enough roll with it. It might be that their idea is way cooler than what you had planned.

A Great Encounter is one that allows the players to strategize, but there's a timer going.

It's best have a mix between Good and Great Encounters.

What is the Goal and What's in the Way?

Every encounter should have a goal that the players understand. How they defeat that goal is entirely their business. Don't create solutions, that's not your department.
What's in the way of that goal? That's the complex obstacle your heroes will need to overcome by either outsmarting it, or out-fighting it.

Treasure rewards for encounters are very minor, like a handful of coins or a spare common item. There's going to be a lot of Encounters so don't overpower your heroes with rare rewards. Usually the main reward for an encounter is being able to progress the story.

Failing an Encounter is a minor penalty and often just means they don't get the reward. This shouldn't make the rest of the adventure impossible, just a little more difficult. Give players the room to fail, but still find success.

If they failed the Encounter because everyone died... well that's another Blog Post I will need to write.

Once was a rock onna ground,

I figure to give it a pound,

But if I missed

It's 'cause I'm pissed

an I'm not good at being profound.

'Dis has been Thog Thoughts."

Leveling is a Lie

Others have noted it, leveling doesn't necessarily make your character better. They just face tougher monsters and the fights take longer. I won't cover that already well-tread ground.

I want to take on the assumption that without leveling, without significant character bonuses earned over time, that a game is only good for a one-shot. Unfortunately, leveling is the default for "character growth" in RPGs because it is simpler than developing a character narratively. Characters growing in a narrative way are much more complex as there are no handy yardsticks to measure it.

To those who think leveling is necessary to hold a player's interest over long games, let me ask you a few questions.

A) Did you ever watch Scooby Doo when you were a kid?

B) Did you keep coming back to see the next week's episode? (okay maybe just the older folks need to answer this).

C) From the first episode to the last episode, how many levels did Shaggy gain? Did he improve in any way or change at all? Nope.

Most sitcoms, cartoons, and weekly TV shows featured no character growth beyond "who's hooking up with who". Yet fans came back for more. They wanted to see the problem of the week unfold, hear the funny quips, and try to guess how it all ends.

A Word About Acting

Acting for the stage is very different than acting for a movie.

It's all to do with where your audience is.

On the stage, the closest audience member is 5-10 feet away. So your acting needs to be big! Your voice, even in whisper, needs to project so that even those seated in the cheap-seats can hear. Your body should animate with huge gestures to show who is taking.

Acting for the camera means going small. The camera (thus audience) is right there, looking at the pores in your nose, the twitch of your eye. Your speech needn't be loud or bellowing, but soft and subtle. A great actor can convey so much emotion through such subtle acting.

So please, consider how far away your audience is at the game table, and try to act accordingly. Especially if there are other people around you.

The Problem With "Epic" Campaigns

Like Hollywood, many GMs are under the impression that the bigger the Threat to Existence, the more compelling the story will be. In my opinion, that's not going great for Hollywood right now and it may not be working great for your campaign either.

One problem with Epic storylines is that if you revisit a storyline based on saving All of Existence, your next story has to be even bigger (Dragonball Z)! Because it has nothing else really going for it except spectacle, does it? Sooner or later, you or your players will either get fed up with increasingly outrageous ways to threaten the universe (Star Trek: Discovery) or you'll just reboot or abandon it.

Not every story needs to be about saving All of Existence. Heroes can get just as much or maybe more enjoyment from just saving a village from the Barbarian Raiders. But if the heroes are working to save a village, I bet the village will know about it.

All Alone in the Night

Your heroes fight the spectacular battle with the Forces of Naughtiness, and though it was tough, they prevail. But... I've noticed a trend in Epic Stories where the world isn't necessarily aware it is in any danger, only the heroes and the villains know what is truly going on. And while a heroic victory without seeking glory is very noble, this is a game of Fantasy. Your players might be looking for some positive reinforcement beyond treasure for what they've done. How about a parade, or at least a heartfelt "Good Job" and "Thank You". Your players likely aren't getting thanks in their real life.

However, all too often the heroes stand alone.

Take Luke Skywalker in Return of the Jedi. During the final battle over Endor, Skywalker has a serious battle of his own going on and the death of Palpatine and Vader may have helped turn the tide of the war. But I doubt anyone except Leia was told about what when down. There are parades for the Rebellion, but not for him. Very noble, the cause is more important than the person.

But! Your players might prefer a different ending, one where the people being saved know that the heroes are there doing what they can. It's all unfolding right in front of them. And when it is all over, the heroes get the recognition they've earned (see Army of Darkness).

All I am trying to say is that if the world is in constant danger of being obliterated every week, what does that say about the world? If the novelizations of Star Wars are to be believed, Republics are made out of tissue paper.

And the Mandalorian? He just wants The Child back. That's all his story needs.

Thog remember. That when Thog accept that he perfect just the way he is.

Think like Thog, 'cause gills are over-rated. You be you. No more, no less.

'Dis has been Thog Thoughts.

How I Handle Money Without Counting Pennies 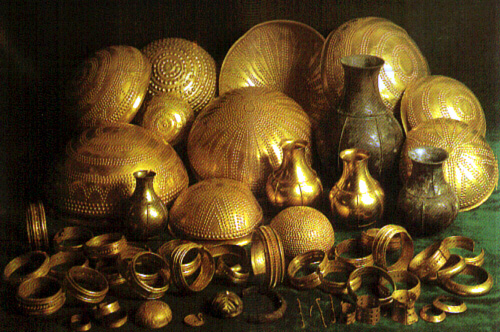 I'm tired of counting coins and cracking silvers into coppers and NONE OF IT IS FUN!

It's an almost proven fact - As math increases, entertainment decreases.

So here's how we simplify things:

Chest of Coin. For the big payments. Magic items, castles, warships, blackmail, it costs Chests of Coins. A Chest of Coin equals 5 Sacks of Coin. Heroes are encumbered if they are carrying a Chest of Coins, so better get a wagon.

Thus we keep wealth descriptive, math is at a minimum, and you can easily gauge whether a hero should be encumbered by their loot or not. And it should be easy to guess-timate the price of anything.

I got the idea from movies, tv shows, Vikings, etc. They never talk about amounts. When someone buys something, they toss a handful coins down and get what they want. The villain always pays a sack of coins to his nefarious henchmen for a dirty night's work. Kingdoms pay ransom to their attackers in chests of coins. The vikings never sat and counted each coin when they were paid off. They just threw open the lid, looked at the loot, and the deal was done.

Edit>> I thought about just using individual coins to represent the wealth, but then heroes would only find single coins. Getting a Handful of Coins sounds better.

Chad Jones
The Authority Interdiction Cruiser is demanding you cut your engines for a Safety and Contraband inspection. What do you do?