So the game went well. By the end, my players were very interested in buying their own copies of Savage Worlds Deluxe. One of them was a Call of Cthulu player who was on the fence about getting Realms of Cthulu. Now he's ready to make the jump.

By the end of The Wild Hunt, the characters were beaten, bloody, and one had been torn limb from limb by 5 Huntsmen. There were also a few moments where Hindrances earned the players bennies. However, during the entire game only one Joker got pulled and it was for the villains. I've never gone through nearly a whole deck without pulling Jokers before but it happened twice last night.

So as I said everyone had fun. There were just a few problems, some do to it having been so long since I had a chance to play Savage Worlds.


Regarding number 3, this was a big issue since there were so many Extras and it meant the difference between who was up and who was gone after a semi successful attack. In the early days of playing savage worlds, I used tokens to represent heroes, villains, and innocent bystanders. One side was clear and the opposite side had a red ring to indicate Shaken. 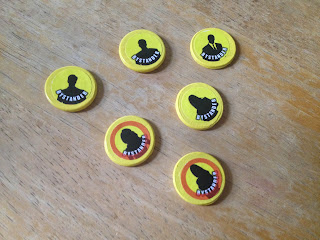 All I had to do was flip the token whenever someone got Shaken, but that was not an option with Pathfinder style pawns (or standees). So now I am facing the hard question of staying with pawns or going back to tokens. Tokens also have the virtue of not getting blown over everytime I exhale over the table.

Pawns have a bit more immersion than tokens by standing up and showing the full character. And both are easy to make and to transport. I took some time to Google how status is marked when using pawns or miniatures in other games. The options didn't thrill me.

Pinnacle has status chips. However leaning chips against the pawn or mini gets difficult when there is more than one status or when a character is surrounded by enemies (as happened last night, twice). Giving them to the player as a reminder is not an option as they are easily ignored in the mess and paperwork. Here's a Link to those chips in the Pinnacle store.

Another option is color coded disks that get placed below the mini/pawn, like those offered by Alea Tools. I'm not keen on this idea either as I would be constantly swapping the Shaken disk in and out, which again could get problematic when enemies are all bunched up.

The third option is to drop plastic rings or pipe-cleaner loops on to the minis, but that looks silly and again I would have a pain pulling them off of a bunched up group.

I'm interested in your thoughts or solutions. Do you think I should go back to tokens or does the verisimilitude of pawns outweigh the negative issues, in your opinion?