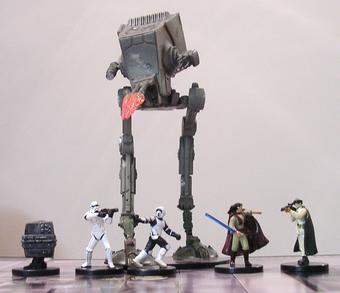 I've been mulling how I am going to do Sci-Fi miniatures for a while. Here are the issues I have run into:

1) If I make unique aliens, it will be impossible to find pre-made miniatures for them.

2) If I make my own figure flats for them, I am looking at an AWFUL amount of drawing. I am not overly keen on the idea, even if I make a photoshop file where I can mix and match outfits and hairstyles, etc like City of Heroes.

3) I could base my aliens on the minis I can buy but NO ONE FREAKIN' MAKES THEM ANYMORE!

If you were lucky enough to get a large collection of Star Wars minis when WotC had the license, you are golden. I didn't get into them fast enough. And there is such a desire for them that minis online (if you can find them) are going for some high prices.

There are some sci-fi looking wargame minis but they are also darn expensive and generally every alien is covered in heavy armor. There isn't much chance of getting non-military, free-booter alien figs.

It is still possible to get some human sci-fi figs. In fact, Reaper is extending its Chronoscope line and it has a lot of figures I could use. However, not much in the way of alien life forms (unless I paint up the skins in Orion green and Andorian blue).

That may leave me with adapting D&D/ Pathfinder minis into sci-fi races. I am not certain how well that is going to look.

But if there are any mini-makers out there: YOU HAVE AN UNTAPPED MARKET!

If anyone out there has overcome this issue with some creativity, please share!

And yes, I have considered legos but I think I want something that looks a little less silly.