Yup, I'm back. I finally found something to say.

I was listening to the Savage GMs Hangout Podcast episode "Everything I need to know about GMing I learned from Star Wars". It's crude, but cool and worth checking out. They were talking about how to model the Light and Dark side of the Force and the legacy of "Dark Side Points" from West End Games. Jarrod begins describing a very complicated system he had designed for his Star Wars Companion that ultimately drove down the path of Dark Side Points and complicated mechanics and yadda yadda yadda...before he trailed off.

Then it hit me, the best way to model the Dark and Light side. It comes from the Revenge of the Sith and all it takes is two new Hindrances. 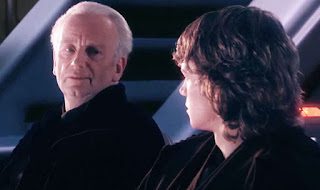 Palpatine: "The Sith and the Jedi are similar in almost every way, including their quest for greater power."

Anakin: "The Sith rely on their passion for their strength. They think inwards, only about themselves."

Palpatine: "And the Jedi don't?"

Anakin: "The Jedi are selfless, they only care about others."

The hero thinks about the welfare of others before his own. Even when he is starving, he'll split his last loaf of bread and given another the larger share.

The hero(?) acts in his own best interests, and has no qualms about abandoning others when it suits him.

So if you chose to make a Jedi character, you would have to take the Selfless hindrance. However, if your actions warrant it, the gm can switch that Hindrance to Selfish and your path down the Dark Side begins.

What's the mechanical benefit? Well they are Hindrances. The more they affect you in game, the more Bennies...ahem... Force Points you will receive. Bennies are a manifestation of the Living Force, and you don't have to be a Jedi or Sith to benefit from a bit of luck.

Wait, what if I'm a Selfish character without AB (The Force)? Are you saying that I'm still using the Force even though I can't shoot lightning out of my hands?

Yup. And if you want to see a character that was consumed by the Dark Side but wasn't a Force Wielder, just look up Bib Fortuna.

Plus, there is this quote:

Luke: "Is the Dark Side stronger?"

Believe me, it is so much easier to play a selfish character than a selfless one. And that is the draw of the Dark Side.

As for how that affects Force Powers, it doesn't. If you are strong in the Force, you can use it to manifest abilities (AB (The Force)). All that separates a Jedi from a Sith is where they can draw that extra bit of luck from.